Home/All, In The News/People For Animals Featured On Animal Planet 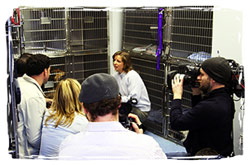 Nellie, a sweet collie mix that was rescued by PFA, was recently chosen to appear on Animal Planet’s “Underdog to Wonderdog” TV series. When PFA found her, Nellie was badly neglected, her coat was terribly matted and she had a strong fear of men. The “Underdog to Wonderdog” team worked with her to overcome her fears, groomed her, and found her a loving forever home. The beginning of Nellie’s journey was recorded at the People For Animals Spay/Neuter Clinic and the final television episode featured interviews with our Executive Director, Diane O’Donnell. The filming for PFA’s first national media exposure was an exciting experience for the clinic staff. The episode continues to be aired periodically on Animal Planet.